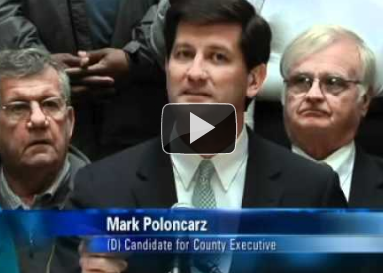 5-17-11: Courtesy of YNN. While much of the political focus of late has been on the 26th District congressional race, that’s not stopping the Erie County Democratic Committee from setting its sights on the County Executive’s race. “A gentleman who is going to bring Erie County together for the first time in a long time. A person who is going to be inclusive in his leadership,” said Erie County Democratic Committee chairman Len Lenihan, describing comptroller Mark Poloncarz, who last week announced his intentions to run for the county’s top job. “Erie County deserves a County Executive who measures the strength of our local economy, not by the size of his own pocketbook, but by whether you are making ends meet out there,” said Poloncarz.