Among likely 2020 general election voters, in a presidential head to head matchup Biden leads Trump by sixty-one percent (61%) to thirty-three percent (33%), with six percent (6%) favoring someone else. In comparison to a similar poll conducted in July 2020, former Vice President Biden has consolidated further support from his earlier lead of fifty-eight percent (58%) to thirty-four percent (34%), with eight percent (8%) then favoring someone else.

Erie County Executive Mark Poloncarz stated, “Similar to a poll conducted in July, this poll confirms that the vast majority of Erie County residents support the actions Governor Cuomo and I have taken to respond to the Coronavirus pandemic, address civil unrest and build back our economy. The poll also confirms the strong support that former Vice President Joe Biden has in Erie County, a result I expect to see once all the mail-in ballots are counted after Election Day,” added Poloncarz.

Topline results for the poll: 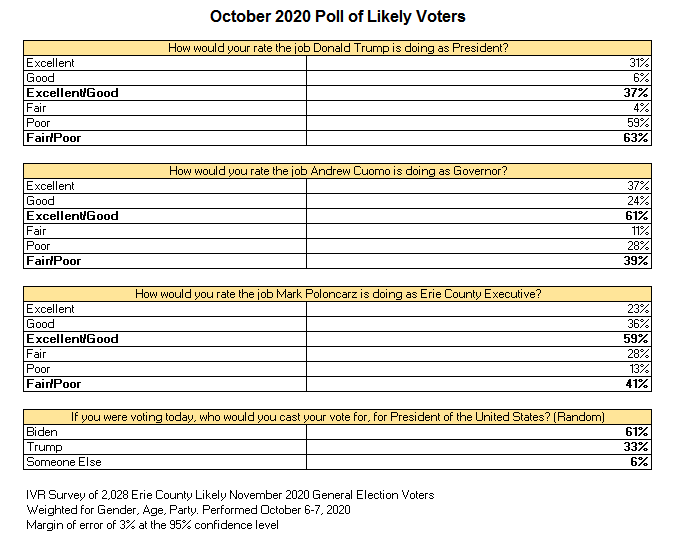 This poll was conducted on October 6-7, 2020 by automated telephone calls in English to 2,028 Erie County likely 2020 general election voters. Respondents’ answers were by push-button response and sampling was initiated by asking if the respondent was likely to vote in the 2020 general election. It has an overall margin of error of +/- 3.0 percentage points at the 95% confidence level. Data was statistically adjusted by gender, age, and party to ensure statistical accuracy to Erie County’s voters.