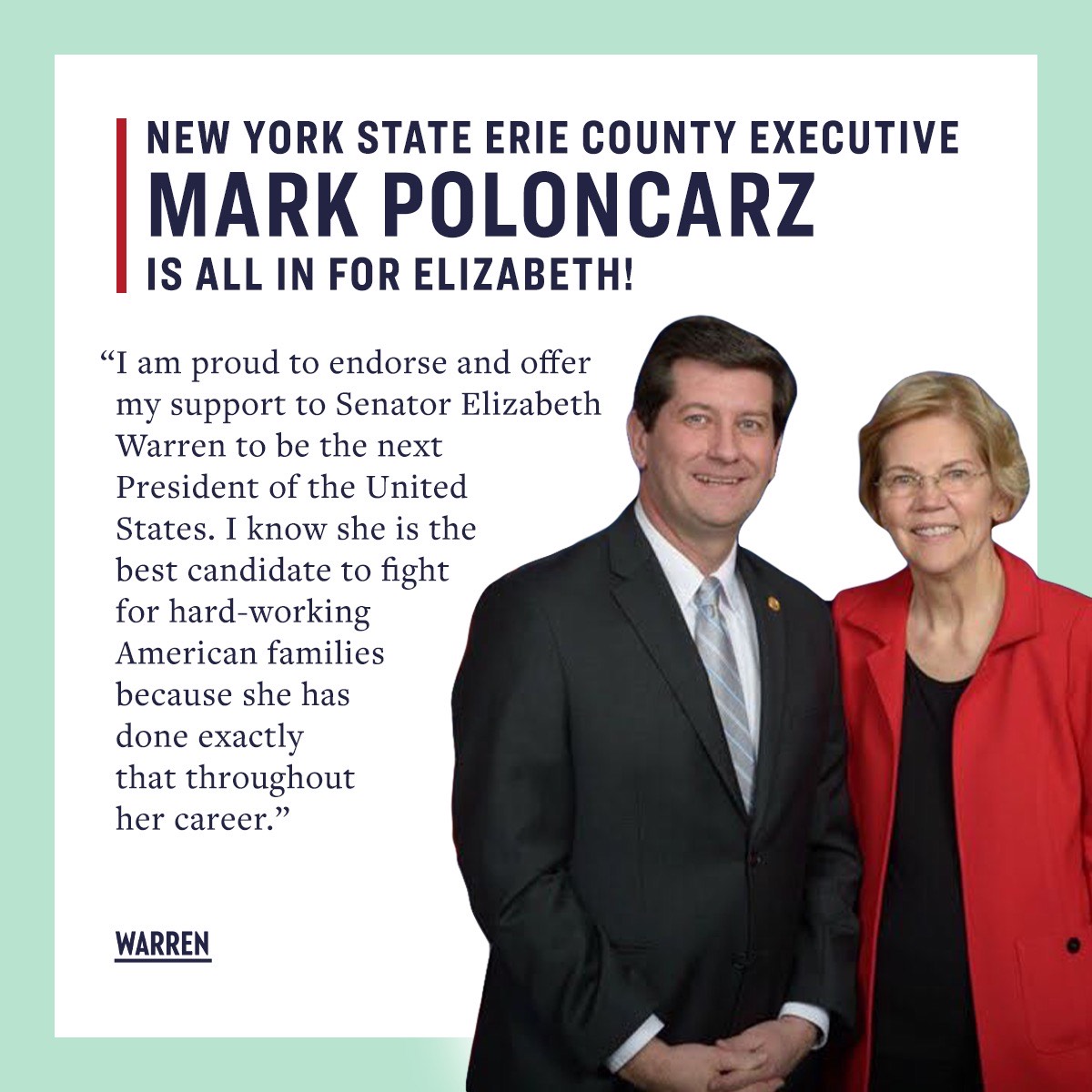 Buffalo, New York – Today, Erie County (New York) Executive Mark Poloncarz announced his endorsement and support of U.S. Senator Elizabeth Warren to be the presidential nominee of the Democratic Party. Poloncarz also announced he will be running as a delegate to represent Warren from the 26th Congressional District of New York at the 2020 Democratic Convention to be held in Milwaukee, Wisconsin.

“I am proud to endorse and offer my support to Senator Elizabeth Warren to be the next president of the United States. I know she is the best candidate to fight for hard-working American families because she has done exactly that throughout her career,” said Erie County Executive Mark Poloncarz. “Whether it was fighting to reform our nation’s bankruptcy code to better protect working men and women, or standing up to Wall Street to establish the Consumer Financial Protection Bureau, or just representing families as an attorney, she understands the issues facing working families and is not afraid to fight for them against all odds.”

Poloncarz added, “Sen. Warren has offered bold ideas to address the social and economic inequity that weakens our great nation, and has a vision for the future where all Americans can truly achieve the ‘American Dream.’ At this time of increasing divisiveness in our country, I know she is the strong, yet compassionate leader our nation needs to bring us together and I am proud to support her.”

“I’m grateful to have Mark Poloncarz’s support,” said Elizabeth Warren. “Since 2012, he’s been a champion for Erie County’s working families and I’m proud to stand with him in the fight for big, structural change. Together, we’ll make sure that our government works for everyone — not just the wealthy and well connected.”

Mark Poloncarz is the eighth Erie County Executive, having first been elected in 2011, re-elected in 2015, and was just recently elected to a third term this past November. Prior to serving as executive, Poloncarz was Erie County’s elected comptroller. Poloncarz previously served as a delegate to the Democratic Convention in 2004 for John Kerry and in 2008 and 2016 for Hillary Clinton. Poloncarz was co-founder of the WNY Democrats for Progress and is a member of the Board of Directors of the National Democratic County Officials. Erie County is the largest county by population in upstate New York, and includes the Cities of Buffalo, Lackawanna and Tonawanda, 25 towns and 16 villages.