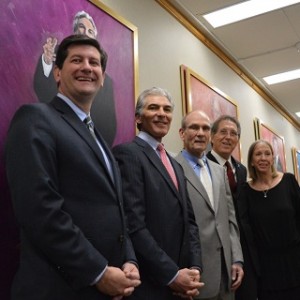 “It is an honor to pay homage and show respect to the first six people to serve in the capacity of Erie County Executive,” said Poloncarz. “As the current county executive I encouraged The Buffalo History Museum to allow us to publicly display this artwork here in the Rath Building. I would like to thank the artist, Mary Smith, for her time and talents and showing great patience as it has been nearly a decade since she completed these beautiful portraits. I am pleased to be able to unveil them today with my predecessors in office in a non-partisan manner that celebrates the history of the elected officials who have led Erie County over the last 50-plus years.”

The portraits include Tutuska, Rutkowski, Gorski and Giambra, as well as former county executives Edward A. Rath Sr. and Edward V. Regan. They were commissioned by the Gorski administration and completed during the time Giambra  served as county executive. They sat in storage at The Buffalo History Museum until being recently rediscovered and hung in the county’s executive’s chambers on the 16th floor of the Rath Building.

A resident of Lake View, Mary Smith works out of three different studios. Primarily a sculptor and portrait painter, she has shown her work extensively in prestigious juried exhibitions. She has won medals and awards for sculpture and for painting. Smith has also had various distinguished public and private sculpture and painting commissions.

In addition to the full-sized portraits now on display on the 16th floor of the Rath Building, her work can be found on display at various locations throughout Western New York, including The Shaw Festival Theater, Forest Lawn Cemetery, Westminster Presbyterian Church, The Buffalo History Museum, SUNY Buffalo, Buffalo City Hall,  SUNY at Buffalo, SUNY Buffalo State and The Buffalo Club.

“I am so happy to be able to see my work on display here at the Rath Building,” said Smith. “I thank County Executive Poloncarz for seeing through on this and of course I also thank the previous county executives for allowing me to illustrate their leadership in portraits that I believe capture the essence of the public service they provided to the residents of Erie County during their time in office.”