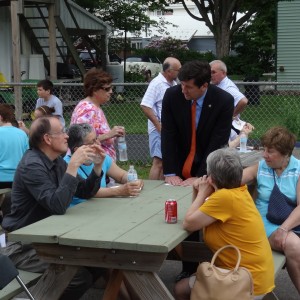 Prior to being elected executive, Mark Poloncarz served six years as Erie County Comptroller. As Comptroller, Mark Poloncarz was known as the “Taxpayers’ Watchdog” and that tradition continues as County Executive. Poloncarz understands government should be run efficiently and effectively as possible, and that is exactly what Mark has done since taking office as Executive.

Mark has worked in a bipartisan fashion with the Erie County Legislature to hold the line on taxes, including reducing the county’s tax rate in 2014, 2016, 2017, 2018 and 2019. Every budget prepared by Mark has met the New York State “tax-cap” requirements, never going over the cap, and all of his budgets ended with a surplus.

In order to go after the waste and fraud that exists in the Medicaid program, Poloncarz entered into a cooperative agreement with New York State to create Erie County’s Office of the Medicaid Inspector General. This office is tasked with performing audits of Medicaid service providers to detect and prevent fraud in the Medicaid system. Since its inception, the Office of Medicaid Inspector General has completed more audits of Medicaid providers than the county Comptroller’s office has done of county government, and many of these audits resulted in findings of waste, fraud and abuse being turned over to the state for prosecution and collection efforts.

As Mark’s tenure as County Executive continues, you can be assured he will continue to be YOUR Taxpayers’ Watchdog.