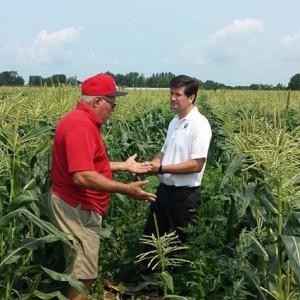 Mark at Zittel Farms, one of Erie County’s oldest family farms in the Eden Valley.

When he ran to be YOUR County Executive in 2011, Mark pledged to focus his administration on growing our local economy and creating jobs, and that is exactly what he has done. On the day Mark was sworn in as YOUR County Executive, the unemployment rate in Erie County was 8.9% but because of the effort Mark and others have undertaken it has now dropped to 3.9% (through December 2018). Additionally, and more importantly, since Mark took office, 31,000 new private sector jobs have been created in the Buffalo-Niagara metro market!

Mark understood that we needed to grow our region by reaching outside of it for new investment. As a candidate for County Executive he pledged he would attempt to bring more Canadian businesses to our region, and as YOUR County Executive that is exactly what he has done: in partnership with Invest Buffalo Niagara he developed and funded a Canadian lead generation program that focused on attracting Canadian companies seeking to expand into the U.S. Since 2012, this program has created 1,030 jobs and invested $146,344,405 into the local economy.

Additionally, Mark’s administration has led the efforts to fully redevelop the Bethlehem Steel site, and that development in now becoming a reality with the acquisition by the county of 148 acres of shovel-ready land at the site to spur development, the investment of more $10,000,000 in new infrastructure at the site, and even building new bike Lanes to connect the site to the shoreline trail.

In 2013, Mark introduced “Initiatives for a Smart Economy” which was his a comprehensive and innovative approach to economic development that built meaningful partnerships across many sectors, harnessing their energies into collaborations that effectively address our region’s challenges while shaping a stronger future.

In less than 4 years almost every initiative was implemented and, to follow up on it’s success, in June, 2017 Mark released his follow-up plan “Initiatives for a Smart Economy 2.0.” This plan builds on the strengths of the original plan and includes 50 additional initiatives specifically designed to help grow all sectors of our economy.

Additionally, when he was elected, Mark pledged to work to reform the way industrial development agencies (IDAs) give out tax breaks to businesses. From his position as a leader of the Erie County Industrial Development Agency (ECIDA) board, Mark has not only stood up to businesses asking for tax breaks that don’t create jobs or new net economic wealth for our region, but he stopped them from receiving tax breaks they do not deserve. Gone are the days when doughnut shops and auto dealerships received tax breaks they didn’t need. Now only businesses that create new jobs and new wealth for the region are eligible for a tax break.

For example, since 2012 and all under Mark’s leadership, the ECIDA has approved 140 projects that have spurred $2 billion in private sector development, created 11,098 temporary construction jobs and 3,058 new, permanent jobs with an average annual salary of $44,649 (or an average hourly wage of $21.46) for these new jobs.

To show Mark’s commitment to protect the public’s tax dollars, Mark has implemented at the ECIDA new policies that protect your investment – your tax breaks – given for a project. These policies include (1) require our local labor force be used on any construction project receiving tax breaks; (2) a recapture policy that requires developers and business owners who receive a tax break to pay back the tax break if the jobs promised to be created are not in fact created; (3) an equal pay policy mandating that all companies that ask for a tax break actually pay their female employees the same as their male employees and proving it through random audits; and (4) a policy requiring any company seeking a tax break from the IDA to be current with all tax payments due any government in WNY. All of these policies protect the public’s investment in a project – the tax break each of us gives to a business to grow in Erie County.

Why has Mark done this? Because he understands that you deserve a County Executive who will work on YOUR behalf to create a stronger, better economy. That is exactly what he has done as YOUR County Executive – our economy is as strong as it has ever been during the past 40 years – and what he will continue to do in the future.